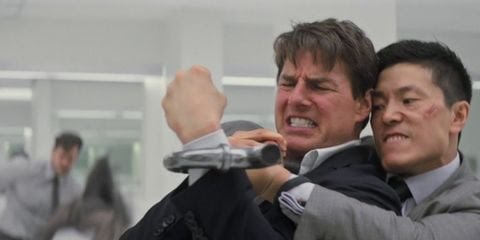 Who Was The Guy In The Bathroom In Mission Impossible?

Who was the guy in the bathroom in Mission Impossible?

Christopher McQuarrie, who directed the 2018 Mission Impossible film, revealed an early vision for the intense fight scene in the bathroom between Ethan Hunt (Cruise), August Walker (Cavill), and an unnamed combatant portrayed by stuntman Liang Yang.

The third role wasn’t originally expected to be Yang: The initial plan, according to remarks from McQuarrie in The Hollywood Reporter, was to surprise the audience by having the third combatant be a recognizable actor, then to deliver an even bigger surprise when their character abruptly died at the end of the fight..

While McQuarrie didn’t reveal which (or how many) actors were considered for the role, the director confirmed at least one performer other than Yang was a serious contender for the bathroom fight’s third combatant. The actor in question was put in a “fight evaluation” to see if they could go toe-to-toe with Cruise’s Hunt and Walker’s Cavill, but ultimately, they failed to keep pace.

The part then went to Yang, who was already working on the film as one of its stuntmen.

“It’s a sequence other actors, when learning the level of commitment required, simply opted out,” McQuarrie said, referring to the strenuous physical toll of shooting the scene.

Henry Cavill Superman Vs Flash See Who Win The Race

In Fallout, Agents Hunt and Walker track a man they believe to be John Lark, a mysterious anarchist calling for the destruction of the current world order. After cornering the target in a public restroom, the agents get more than they bargained for as they engage in an intense fistfight with “Lark,” who turns out to be a decoy.

The impersonator wipes the floor with Cruise and Cavill as the three throw punches, club each other with pipes, and launch each other through windows, sinks and walls. Yang’s decoy nearly wins the fight single-handedly before Ilsa Faust (Rebecca Ferguson) intervenes, killing him with a pistol.

Despite not using a third big-name actor for the fight, the bathroom brawl went on to become one of Mission Impossible’s most memorable scenes, and one that played a major role in Fallout’s marketing campaign. Fallout is also the highest-grossing movie in the Mission Impossible franchise, and it is considered by some to be one of the greatest action movies of all time.

Tags: Who was the guy in the bathroom in Mission Impossible?